The Speech by Eng Hussein Abdi Duale, Minister of Energy and Mining of Somaliland at the 20th African Mining INDABA 2014

Hargeisa, Somaliland – Frankincense wafts through the air of a quiet building on the outskirts of Hargeisa, in the self-declared republic of Somaliland. It masks the odour of the remains of 38 men, whose skeletons are packed into cardboard boxes.

The tattered containers will be opened this month with the arrival of a forensics team on February 10. Somaliland officials want to show that the men were victims of a clan-based killing spree carried out by Somalia’s government in the 1980s.

They say as many as 200,000 men, women and children were executed and buried in mass graves. They accuse Somalia’s late dictator, Mohamed Siad Barre, of atrocities and want to put his alleged henchmen on trial.

“Everybody is missing a relative. Fathers, mothers, brothers, cousins,” said Khadar Ahmed Like, who runs the territory’s War Crimes Investigation Commission. “It is about getting the perpetrators in court. Unless we learn lessons, heads of state can do what they want.”
This month’s post-mortems mark the latest bid to secure justice for Somaliland’s victims. The atrocities date back to when Somaliland was part of Somalia and governed by Barre from the capital, Mogadishu.

In the 1980s, his increasingly authoritarian regime cracked down on the rebel Somalia National Movement (SNM) and targeted members of the Isaaq clan from northwestern Somalia who had created the group.

National forces arrested Isaaq clansmen suspected of having links to the SNM between 1984-88, commissioners say. Men, women and children were bound and frogmarched to the edges of towns and executed.

Somalilanders recount gruesome stories of Isaaq schoolchildren being killed and having their blood drained to provide transfusions to injured soldiers.

Yusuf Mire, 58, is still angry about what happened. He points to the amputated stump of his left arm, where he was shot by Somali national forces during a crackdown in the central Somaliland town of Burao in 1988.

“My relatives were taken from the house to be slaughtered,” he told Al Jazeera. “We want recognition that genocide took place in Somaliland. We will send this to the UN and get the right to be separated from the rest of Somalia.”

In 1988, Barre sent aircraft and troops to the SNM stronghold of Hargeisa, killing more than 40,000 people and reducing the city to rubble. But the campaign backfired and consolidated the opposition forces, which took Mogadishu in January 1991.

Four months later, Somaliland broke away from Somalia. While Somalia collapsed into more than two decades of civil war, Somaliland gradually developed better security, a livestock trade, its own currency and democratic elections.

Evidence of atrocities emerged in May 1997, when heavy rains washed away dirt to uncover skeletons from Hargeisa’s mass graves. But efforts to raise the profile of the atrocities failed to gain traction beyond the isolated region.

“We are now going to bring this to the international arena,” Somaliland’s Foreign Minister Mohamed Bihi Yonis, told Al Jazeera. “The perpetrators are hanging around, living a normal life. Those who are living in the West, we must go after them.”

This latest drive, funded by the US-based Center for Justice and Accountability ( CJA ), saw the 38 bodies exhumed in September 2012. This month’s visit by an eight-person team will study the skeletons for evidence of systematic killings and will excavate a second site.
“Hargeisa is a graveyard,” said Jose Baraybar, a forensics expert who manages the team. “Some say there are 200,000 bodies under the ground. Others say 60,000. Nobody really knows. That’s why we have to get the record straight.”

They will look for bindings, close-range headshot wounds and other signs of systematic killing, said Baraybar, who has worked on probes in Haiti, Bosnia and elsewhere. Evidence that victims hailed from the same clan could indicate genocide, rather than mass-murder.
The three-year project will train locals to unearth Somaliland’s 226 known mass graves. The commission has listed 33 suspects for prosecutions. They include Barre’s son-in-law, Mohamed Said Hirsi, better known as “General Morgan”.

But there the project hits a snag, because Somaliland is not recognised by other countries.

Officials in Hargeisa lack the clout to push for a UN-backed tribunal, such as those that prosecuted the criminals of Rwanda and

Yugoslavia. Legally, Somaliland is part of Somalia, which has not joined the International Criminal Court.

“They are a long way from launching prosecutions,” said Baraybar. “All of the killers have left Somaliland – they’re in Somalia, the US and Europe. Prosecution is very difficult for a country that is not a country yet.”

Down south in Mogadishu, there is little appetite for war crimes tribunals – either for Barre’s brutality in Somaliland or any other atrocity that has occurred in years of violence between rival clans, Islamists and foreign forces.

Like, a 64-year-old father-of-eight who lived in exile in the 1980s, said the suspects include members of Somalia’s government and parliament – although he declined to reveal their names for fear of repercussions.

Some live in Somalia, but others are in Kenya, Europe and the US, he said. Prosecutions must begin soon because the atrocities started almost 30 years ago, and some of the masterminds have already died.

Not all perpetrators have escaped justice. In 2012, seven Somali victims secured a $21 million judgement against Mohamed Ali Samantar, a Barre-era prime minister, for planning the torture and killing of Isaaq clansmen, in a US court.

It was one of three civil cases that the CJA has helped bring against Somalis who migrated to the US, using a statute that provides civil remedies for overseas abuses. But such cases fall short of the criminal tribunal that many in Somaliland want.
‘
We remember’

The bombing of Hargeisa and other atrocities cast long shadows across the breakaway region. Few Somalilanders want to rejoin Somalia, despite recent security gains under a UN-backed government in Mogadishu.

Somaliland parents tell their children stories about the cruelties. The cash-strapped government spends $50,000 on the war crimes commission each year, and is building a $300,000 museum to showcase skulls and weapons from the bloody era.

“When the former Somali government controlled the country, many Somaliland people were killed,” said Mohamed Jamal Emil, a 21-year-old who lives in a hut on the outskirts of Hargeisa. “It was a long time [ago], but we remember. My parents told me.”

Somaliland diplomats are in talks with counterparts from Mogadishu over long-term autonomy and independence. The atrocities and prospects for a tribunal could feature in the negotiations.

For Baraybar, the war-crimes sleuth, there is more to this probe than the prosecutions it may yield.

“The grandchild must know what happened to his grandfather.”

Renfield Foundation Award for Global Women’s Health is Edna Adan Ismail, an inspiring advocate for women and girls, whose maternity hospital in Somaliland 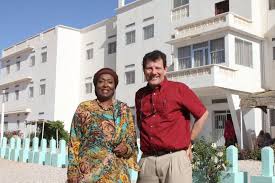 The inaugural recipient of the Renfield Foundation Award for Global Women’s Health is Edna Adan Ismail, an inspiring advocate for women and girls, whose maternity hospital in Somaliland is an oasis of healing and care for the country’s women.  Adan was nominated for this award by Nicholas Kristof, columnist for The New York Times and co-author of Half the Sky: Turning Oppression into Opportunity for Women Worldwide.  This book features Adan among its many stories, which serve as a call to action against the oppression of women and girls in the developing world.

Adan was born and raised in Somaliland, and was the first Somali girl to be awarded a scholarship to study in Britain.  She studied nursing, midwifery and nursing management for seven years before returning to Somaliland, where she became the first qualified nurse-midwife in the country and the first Somali woman to drive a car.

Adan later married Somaliland’s prime minister, Ibrahim Egal, and she became the first lady of the country.  After the two divorced, Adan joined the World Health Organization (WHO), where for years she advocated for the abolition of harmful traditional practices like Female Genital Mutilation (FGM).  When she retired from the WHO, she sold all of her possessions, and returned to Somaliland to build a hospital.  The Edna Adan Maternity Hospital officially opened in 2002.

The health of the people of Somaliland is among the worst in Africa, with one of the highest Maternal and Infant mortality rates in the world.  Every year, one baby in eight dies in infancy while nearly 4000 Somali women die in childbirth.  The Maternity Hospital is dedicated to training fully-qualified health care professionals, and to training and dispatching 1000 midwives throughout the country.  It also remains committed to Adan’s mission to fight the practice of FGM.

Edna Adan has been a passionate leader not only as a hands-on nurse in Somaliland, but also in building a hospital and a training system to produce more nurses and midwives to work in remote areas across her country. She has been a tireless force to end female genital cutting in her country. The result is that largely by force of will, Edna is saving lives every day — and putting in place public health systems that will save lives for many decades to come. She’s a force of nature, and it’s a privilege to watch her in action.

– Nicholas D. Kristof, Columnist for The New York Times and Co-Author, Half the Sky: Turning Oppression into Opportunity for Women Worldwide

Turkey hosted the third official talks between Somalia and Somaliland for the improvement of relations and political dialogue between the country and its autonomous zone on Jan. 16-19 in Istanbul.
Releasing a statement on Monday, the Foreign Ministry said that during the inter-delegation meeting, the two sides had agreed on a final statement.
The creation of an office in Turkey to assure the steps that will be taken, the rules that will be followed, the resolution process and the institutionalization of talks is among the points that were agreed on during the meetings. The two sides also expressed a commitment to holding talks every 90 days.
Interior Minister Abdikarim Hussein Guled represented Somalia in the talks, while Somaliland was represented by its foreign minister, Mohamed Bihi Yonis.
The Foreign Ministry welcomed the talks’ final statement, underlining that Turkey will continue to host the talks between Somalia and Somaliland for the prosperity and stability of its friends and brothers, the Somali people. The statement also said that Foreign Minister Ahmet Davutoğlu had called the two ministers and congratulated them after the meeting.
Turkey places great importance on the integrity of Somalia and pledges to continue its support for the reconciliation, stability, prosperity and development of Somalia.
Somaliland unilaterally declared its independence as a de facto sovereign state in 1991 after a coalition of clan-based armed opposition groups ousted the nation’s long-standing military government. Somalia wants Somaliland to be part of a united country. But the territory, which has been a haven of peace compared with the chaos and bloodshed in the country’s south, is seeking international recognition. The international community is urging the sides to find a negotiated solution.
Source: TODAY’S ZAMAN